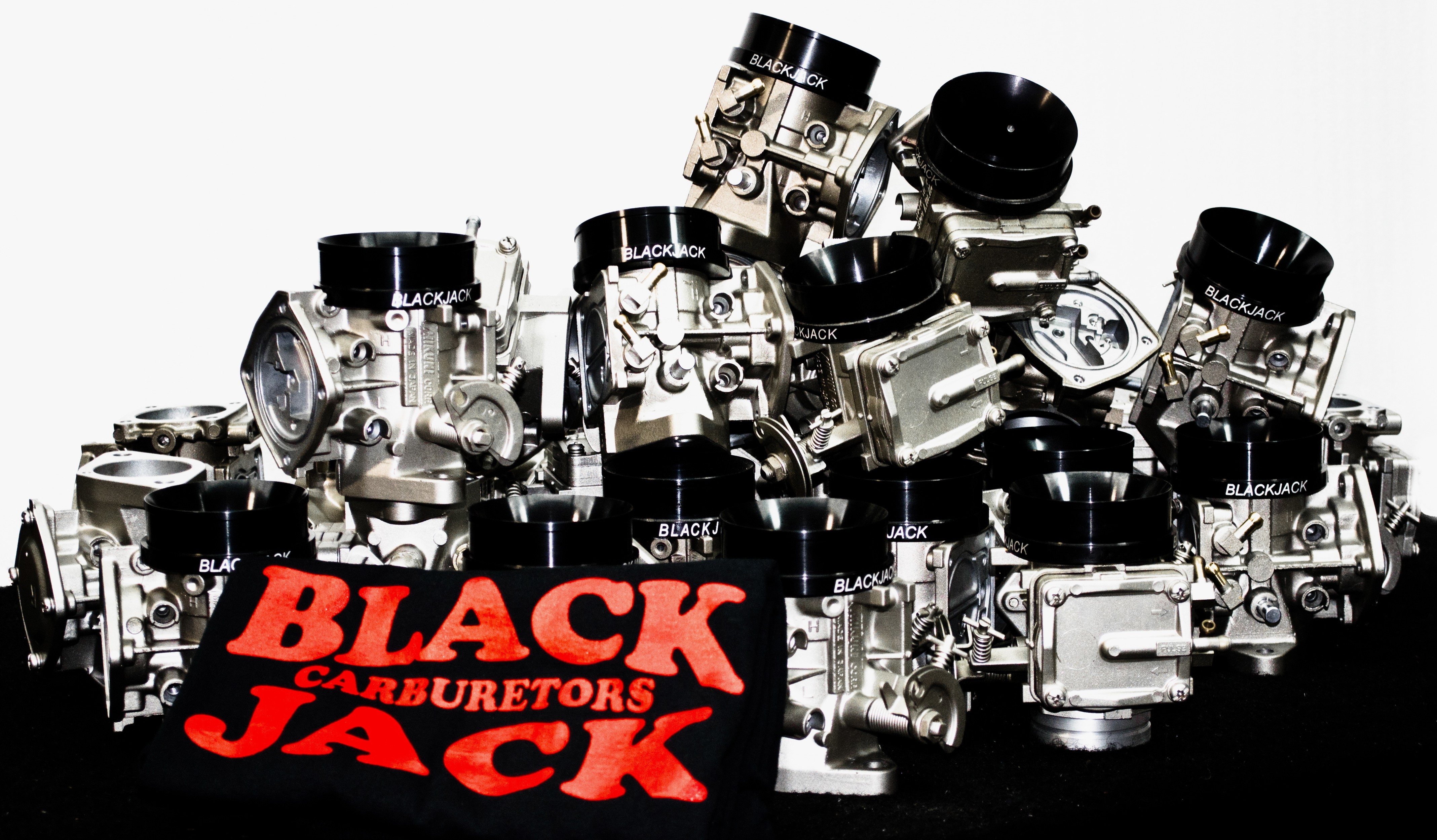 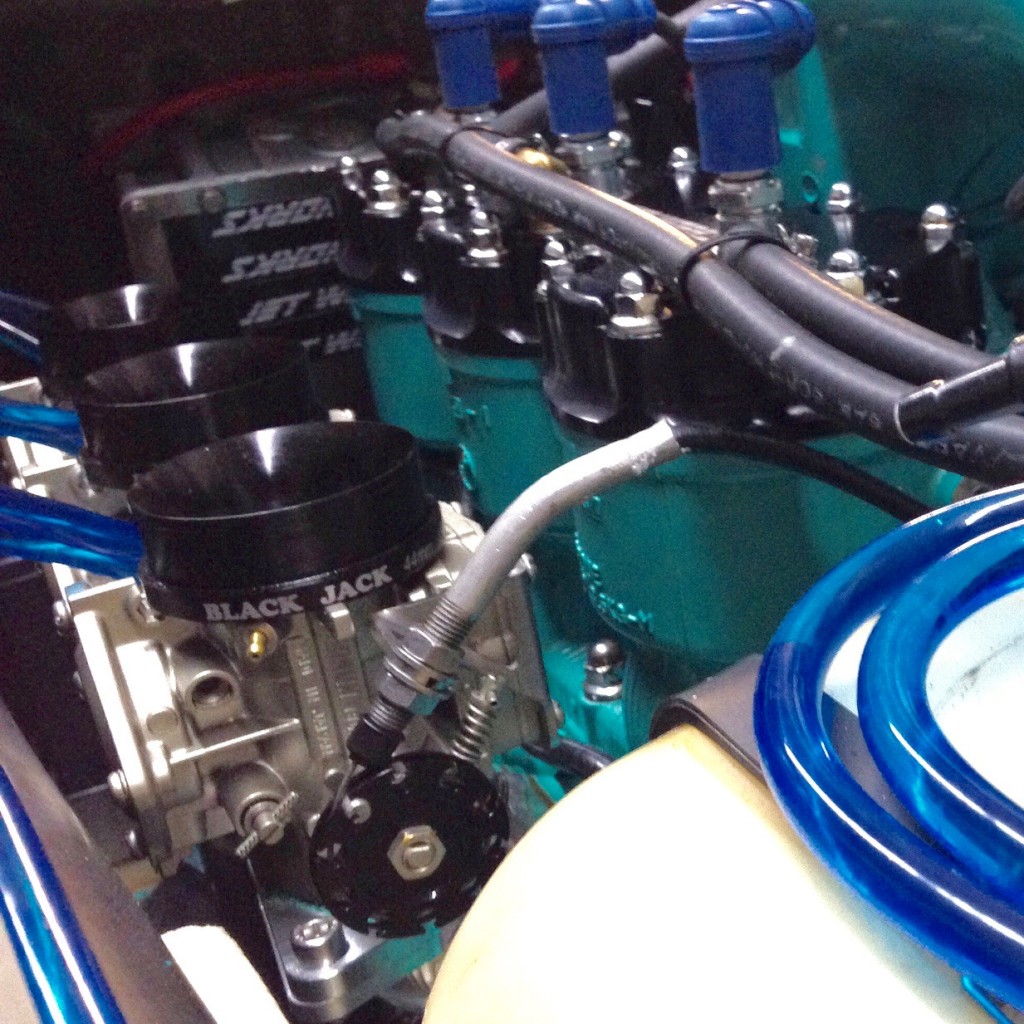 In 1992 Art Gomez of Jetworks got word from Yamaha insider that they were going to release a new power-plant for their now popular SuperJet model stand up. He knew that there was going to be a need for a superior carburetor in order to supply the demands of the new Pro Mod & Super-Stock engines. At the time, there were very few options for aftermarket high-performance carburetors and most that did exist were developed specifically for racing, meaning they were difficult to tune and very inconsistent. At Jetworks we didn’t want a carburetor that “only a pro could tune”. We wanted to develop something that would outperform the alternatives in every aspect of riding, that meant it needed to have instant acceleration, superior mid-range power, and unmatched top-end flow. With over two years of dyno, flow bench and on water testing we finally achieved our goal in 1994 with the release of the “XBN” Series Black Jack Carburetors.

We tested different styles of fuel delivery systems from different shapes of booster venturis to different fuel tube atomizers and we found that the Annular Discharge Fuel Delivery System used on the Black Jack Carburetor was far superior to the rest. 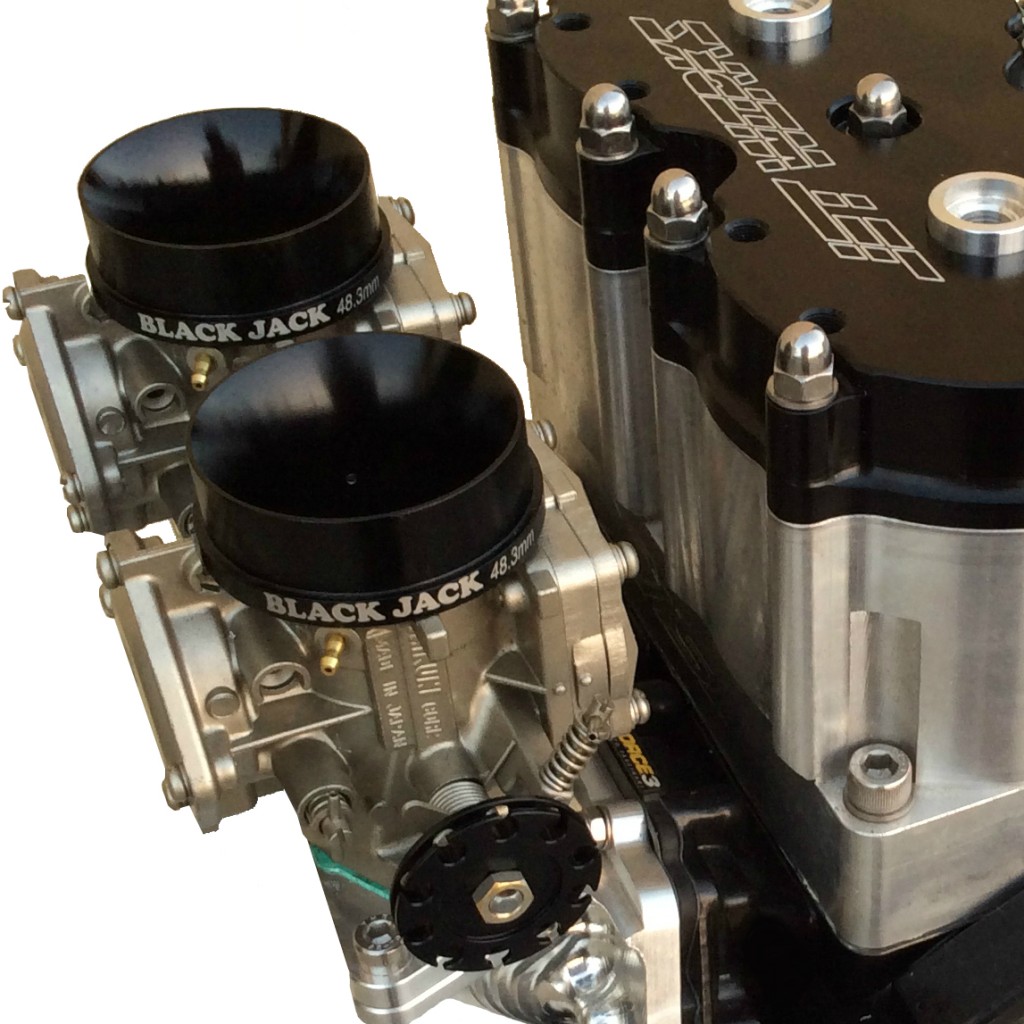 We offer different sizes carburetors all with a straight bore design, this means, unlike some other guys claiming to have larger carburetors they have to offset the main throat bore, this causes air flow directional change in the body which creates a less than ideal condition for tuning and consistency. They are measured at the throttle plate using either 44mm, 46mm, or 48.3mm and features a massive 70mm bell top opening that tapers down with a specific air entry geometry correlating to each specific size bore.

Unlike carburetors with a bombsight or booster, the Black Jack is similar to a throttle body on a modern four-stroke in the sense that it has no obstruction of flow, meaning that we have nothing restricting airflow, giving you 100% flow capacity. Additionally, its fuel delivery system has been mathematically calculated and tested with 12 size specific orifices, arranged in a circle around the venturi similar to an analog clock, these create a shower effect that distributes the perfect amount of fuel and increasing atomization.

With all these features the outcome is a performance carburetor that delivers instant throttle response, and unmatched air flow at high RPM’s, thus creating the best carb for all disciplines of riding. 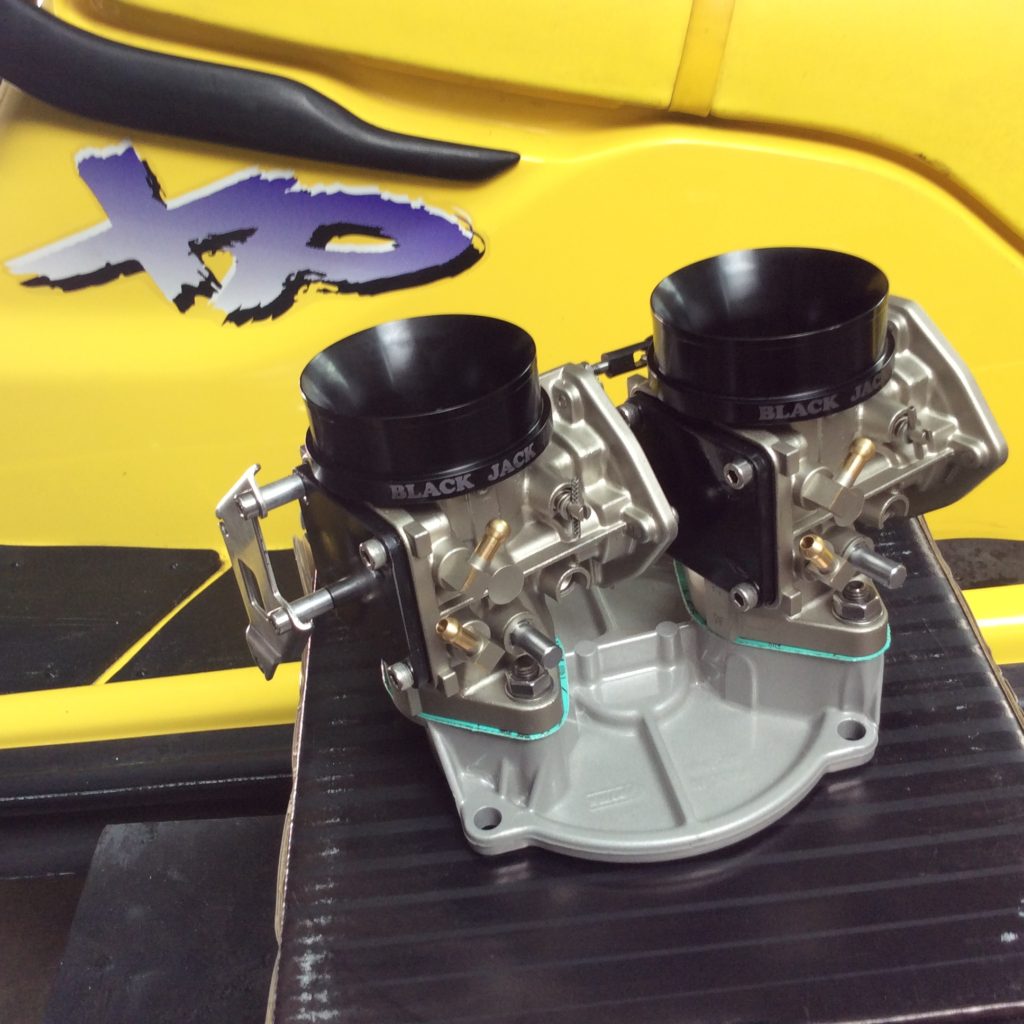 While other companies have gone through 3 or 4 design changes over the years, The Black Jack Carburetor has remained unchanged since its inception. The reason for this? They were designed right from the start!

Throughout the years we’ve tested every major high-performance aftermarket carburetor available to the public (including some that have attempted to copy our design), and time and time again we come to the same conclusion, The Black Jack Carburetors, idle smoother, hit harder, and flow more than the competitor’s carb.

Whether you’re trying to edge everyone to the first turn, or trying to keep height while linking up multiple aerial maneuvers, The Black Jack Carb will help get you there.

*All Jetworks built freestyle, racing, and moto-surf competition engines are built to use The Black Jack Carburetors.

• How can I order some Black Jack Carbs?
You can visit JetworksPerformance.com and search the store but be aware that due to everyone having specific needs and high demand of the Black Jack Carburetors, the best way to order is via E-Mail or by Phone. This also allows us to figure out your best option based on your set up and give you the most up-to-date on availability.

• What size Black Jack’s do I need for my engine?
The Black Jack Carburetors do not tune like other high-performance carbs, most other companies always try to push their biggest (and most expensive!) option regardless of how you ski will run once they are installed. We offer different sizes because of the vast differences in running gear and riding goals, and a “one size fits all” is not best when trying to maximize performance and tunability. Look at the charts below to give you an idea of what we generally recommend, and contact us for more information on what’s best for your specific set up.

• Should I go single carb or twin carbs on my custom build?
If you are after maximum performance and tunability, the twin will ALWAYS be the answer. There is no scenario in which a larger single carburetor will outperform two carburetors, even if the twin configuration is of a smaller size. While the reason why is more complicated, but the easiest way to explain this is adding the total amount area the carburetors let pass through your engine. Example: if you have a single 48mm carb, that means your engine has to share 48mm worth of air for each cylinder in order to breathe. If you have two 44mm Black Jacks, that means your engine has 44mm per cylinder or a combined size of 88mm to use. Even twin 38mm, especially when modified, are more user-friendly than a big single carb. Anyone who claims otherwise doesn’t know what they are talking about, and you should be wary of taking their advice.
Typically when someone wants to use a single carb set up is because they think it will simplify tuning or they’re looking for a cost effective option to upgrade from their stock configuration. If you must use a single carb, we recommend that you stick to a 44mm Black Jack and your engine isn’t any bigger than 800cc, but the best option to achieve simplicity, ease of tuning, and cost effectiveness is to modify you twin 38mm or 40mm that come stock on all 1996+ Yamaha SuperJet’s and Kawasaki 750 SXI-Pro & 800 SX-R. We call this the the Black Jack T.T. Mod, Click Here for more information.

• What are the Black Jack H.S.S. Carbs?
The Black Jack H.S.S. were developed for team Polaris in the mid 90’s when their sponsored carburetor was not providing them the results they demanded. Only a handful of these was made for all of Team Polaris race craft and specific Team Sea-Doo racer’s, and have been discontinued since.

• Do Black Jack’s tune like other carbs.
No, not at all. When we developed the Black Jack, we tested different design tops and tested them for signal strength, varying the shape and air entry geometry produced different figures. Based on what we learned during its development, we are certain that the Blackjacks offer a better fuel curve delivery and are easier to tune and offer more consistency with less sensitivity to barometric changes. Using tactics or set ups from other carbs on the Black Jacks will yield poor performance. That includes other annular discharge carburetors, by that logic all carburetors that feature a “Bombsight” or “Booster Venturi” should tune the same, which is also untrue.

• Are Black Jack’s a “race carb” or “freestyle carb”.
These terms are used when carbs don’t function like they are expected. While the Black Jacks gained popularity during the racing era, it’s important to remember our goals when originally designing it. The best carbs for all types of riding. A carburetor should be designed to function with the rest of your drivetrain, and the only difference comes down to setting up and getting the carbs to work in conjunction with your drivetrain rather than against it. This is why we stress that Black Jacks are the most tunable performance carb available because when everything is set up correctly, the Black Jack’s will prove to be the best “_____ carburetor” regardless of what you’re doing.

• Would installing Black Jacks fix my “tuning” issues?
In short, no. We’ve been doing this for over 30 years now, and we can tell you that 99.9% of the time someone’s engine isn’t running right, they blame it on the carburetors. Accurately tuning a PWC carburetor requires a basic understanding of its functions and adhering to a few basic rules. Most importantly, you can only expect the carbs to work as well as your rest of the vehicle does, a mismatch of engine components and or porting may create a carburetor nightmare. If you have an engine that was not assembled correctly, if it is not ported correctly, if your reeds are defective, if you have an electrical issue, if the pipe set up is off, if you don’t change spark plugs, if you have an exhaust leak, etc. ect., bolting on ANY kind of carburetor is not going to help your tuning issue.
With that being said, If indeed, your issue is carburetor related, and everything else is in order (you have to help determine that yourself) then yes, having us set up Black Jack Carbs for you will get rid of your tuning issue, and as a bonus, you’ll also be making more power as a plus.

• Can you guys convert my current Mikuni SBN to a Black Jack?
We no longer offer this service on the XBN Series 44mm, 46mm, & 48.3mm carburetors due to issues with old carbs and the rise on cost with Mikuni Parts. However, we still offer modifications on customer supplied 38mm & 40mm Mikuni’s, normally found on stock 96+ Yamaha SuperJet’s and Kawasaki SXI Pro & SX-R models. We call this the Black Jack T.T. Modification, click here to learn more about this mod.
These are also available individually in 38mm sizes for Go-Kart uses.

• I found some used Black Jack Carbs, should I buy them and send them to get rebuilt?
We highly advise being cautious when purchasing used carburetors, in the past, we’ve seen used carbs that have been altered rendering them un-tunable or are in really bad shape leaving the customer to spend more fixing a used set of Black Jack’s than buying them new. Sight unseen it’s impossible to tell what may be wrong or what may have to be replaced potentially making used a non cost-effective option.
For Reference as of 2013:
Mikuni SBN Rebuild Kit $56.99
Mikuni Throttle Shaft Rebuild Kit $39.99
Black Jack 48.3mm Throttle Plate $24.99
Mikuni High-Speed Jet $3.99
Mikuni Low-Speed Jet $3.99
Mikuni Viton Needle & Seat $21.69
Mikuni Spring $3.69
And does not include labor.

Here’s a link to a list of the fastest home built Yamaha GP-R 1200cc /1300cc two stroke’s, these people are “speed freaks” many of whom have personally have tested all other carburetors available and are willing to do whatever is needed to go faster, and the top 5 reaching near 90 MPH on this list have found the Black Jacks to perform the best.